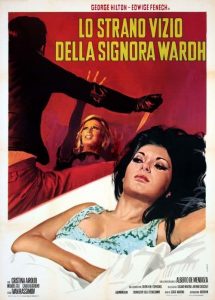 Unexpectedly, two movies in a row on my tragically massive Shudder watch list were giallos[1]. The Strange Vice of Mrs. Wardh tells the story of an American(?) diplomat’s wife, whose husband is on assignment in Europe[2], and her story’s intersection with a recent sex criminal in, uh, town. The best part is (and maybe this is a key component of giallos[1]; as I’ve stated elsewhere I’m not an expert on the genre), the first thing that happens is she is given an ironclad alibi for not being the sex criminal herself, due to arrival / murder timelines, just like what happened in Tenebrae.

Anyway, blah blah blah lots of murdered people who are either apparently evil and/or were topless at an earlier point in the film, about like you’d expect, but what I’m most interested in here is the title. Mrs. Wardh has vices, don’t get me wrong, the most obvious of which is that she sleeps around. But that’s hardly strange, as vices go? The only strangeness apparent is in a lot of flashbacks to a previous boyfriend who is a current stalker, and I can’t work it out.

Because the stalker ex testifies as to her strange vice, and flashback scenes confirm the bare bones of his testimony, but she seems detached at best and coerced at worst in these flashbacks, and never responds to any of the ex’s innuendos about her being the driving force behind said events.[3] On top of that, even if his vice testimony is accurate, it has zero percent bearing on anything else that happens in movie, for good or ill. Like, why are we even talking about this? If the goal was explaining why she deserved to be stalked and/or terrorized, well, maybe it worked better on 1971 audiences than it did on me, and that is the only goal I can even guess at.

In conclusion, giallos[1] are weird.

[1] gialli, properly, but who’s counting?
[2] I know what you’re thinking. “Chris,” you’re thinking, “diplomats are assigned to countries, and Europe isn’t a country.” And if this had been a newer movie, I wouldn’t even be able to defend myself. But here’s the stone cold truth of the matter. Every time, every time there’s a mention made about spending money or what something costs, they reference a different currency. Every. Time. All without any evidence of the amount of travel that would otherwise perhaps justify this.
[3] Why am I treating her vice as a spoiler? It’s a good question, and yet, it is the title of the film.