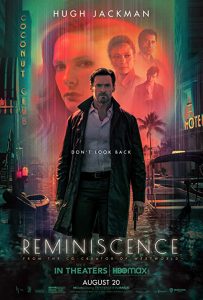 It’s not really clear to me what Kevin Feige is going to do when he tries to introduce the X-Men into the MCU. Not only has Hugh Jackman refused to play Wolverine again, but he apparently got the mutton chops in the divorce with Fox. Seriously, bro looks within an approximation of no differently than he did in 1999.

Okay, dumb mutton chops joke out of the way. Moving on…

Reminiscence is not really the movie I expected it to be, but in a good way! See, what I expected was a riff on Inception but memory instead of dreams. What I got was future noir, every bit as dark and gritty[1] as the stuff from eighty or ninety years ago when the genre arose, wrapped up with a neat little sci-fi bow. Hugh Jackman is the detective, even though that’s not quite his actual job, it’s something more like memory tour guide? And he has a secretary (again, not really, she runs the memory machine in real life) and a femme fatale nightclub singer in a red dress walks through his front door as the first act opens. Someone knew what’s what.

I’ll save you some trouble and say that the story is almost entirely told from a linear perspective, even though the nature of delving into memories again and again makes it feel like that’s not the case, at times. So, call it linear with flashback digressions? And if you like the genre[2], this is a pretty fantastic example of it.

[1] Well, less grit, more water, but “dark and wet” isn’t going to work as a replacement catchphrase.
[2] I don’t actually know whether “future noir” is a genre, or something I made up just now, or what? But what I have in mind is traditional noir, but less sexist than that, set in a no more dystopic future than original noir was set in a dystopic version of its present; just a future that is predicated on the outcomes of our own moderately dystopic present.