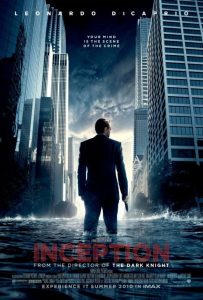 Inception is troubling to me, for a few reasons. There are a lot of reviews floating around the internet today talking about how amazing it is, spending a sentence or three doing so, amping up expectations beyond all reason. And they’re not saying much of anything else. For my part, I guess what is troubling me is that I can’t think of a better way to handle the situation. Because, as much as I hate the expectations game, the movie really is as good as people are saying, and I really don’t want to say anything about it either.

Still, it’s my job and I’m gonna. So. It’s like an Ocean’s Eleven heist caper, done up with sci-fi trappings and a psychological thriller hook. And with an overly dramatic soundtrack that lends an extra dose of portent to every single scene. Honestly, that part is unfortunate because the film as scripted and shot is plenty enough portentous on its own, with all kinds of moral questions to consider and dramatic fates to create or avoid. I’ve seen a few other complaints, for the most part equally nitpicky, and while I understand them, this is the only one that really bothered me.

At the end of the review, my point is this: maybe the movie has been oversold for you, and that’s a damned shame if so. But go see it anyway, because regardless of how you walk out of the theater feeling about it, you’ll regret it if you don’t get to be in on the discussion. Folks will be talking about this one for a while.