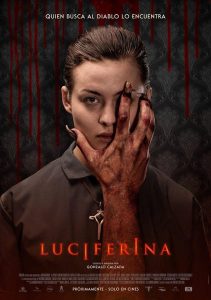 I know what you’re thinking. You’re thinking, I haven’t seen enough Argentinian nunsploitation trilogies lately, and I sure do want to get in on the ground floor of a new one! Well, with the caveat that since it’s ground floor, it’s not provable that the whole trilogy will be nunsploitative, of course.

Luciferina is the thoughtful, heartwarming tale of a young nun who has just gone on leave home for a family emergency only to head off into the (Peruvian?) jungle with her sister and [the sister’s] friends to meet a shaman who will lead them in an ayahuasca ceremony to solve all their problems, I guess? Including that the sister has a truly terrible boyfriend, and… well, to be honest, that’s the only one I can remember, besides the whole recent family tragedy. I know that at least two of the friends had problems, but what they were has completely eluded me.

Later, mayhem ensues when maybe drug-fueled hallucinations? maybe drug-fueled acts of violence? maybe the fallen LightBringer himself? result in the kinds of things you’d expect out of a horror movie, with or without the nun angle.

This came out in 2018, so I have no idea when or if the future volumes of the trilogy will appear, nor how nuncentric they will be. Nevertheless, and despite how flippant I’ve been, this was a pretty good movie whose sequels I look forward to.