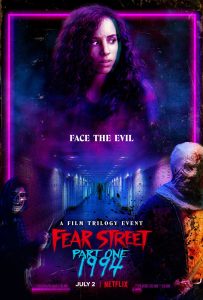 As I sit waiting for Office 365 to install on my work machine, I find myself with time[1] to squeeze in the first review of the Fear Street trilogy, which I watched last night. This is good, because I’m out to the theater tonight, and if I don’t review now, I’ll be behind.

So, 1994. Man did they spend a long time establishing it was 1994. Hey, look, B Daltons and Software Etcs still exist! Check out these dozen in a row 30 second clips of songs you will remember from the ’90s and probably won’t look up to see if they had actually been released by 1994 or not! In the midst of all that, we learn that rich people Sunnyvale has a rivalry with poor people who also murder each other a lot Shadyside, across the lake. We also learn that the murders are happening again, in a scene that was so reminiscent of Scream that before the guy dressed all in black robes with a white face mask does some murders with a knife by basically punching the knife in as far as it will go[2], I had already said, “hey, that ringing phone is using the Scream ringtone[, from when Drew Barrymore got offed in the iconic opening scene]!”

Just saying they are going for an aesthetic here, and that aesthetic is: The ’90s!

The rest of the flick, once they stopped establishing and got on with plot and character development, was pretty okay. I actually felt a little bad when nominally disposable characters were in fact disposed, you know? And I care about how the trilogy turns out. As such things go, it’s not nothing.

[1] Or do I??? I mean, unless I finish first, I didn’t have time after all, and I don’t know the outcome yet[3]. Lucky I’m wasting the clock on this instead of, like, the movie review. Woo.
[2] My point is the ineffable quality of the violence was very Scream-like. If you know, you know.
[3] 30, maybe 36 hours later: I did not have enough time.