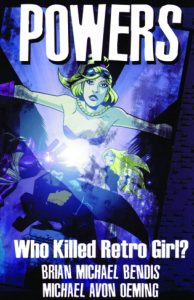 Here’s the thing. Either I (via listening to my friends and Amazon recommendations, it’s true, but in this case also on my own merits, since I bought it used and un-recommended) am really good at picking graphic novel series that I will like, or else I am a sucker for the format and just like any of them that I read. I don’t wish to test the theory by picking up something I expect to dislike and seeing how it goes; apparently because my happiness trumps science.[1] I’m not exactly sure how to tell you to calibrate your expectations when I don’t know which of the options is the truth, but at least now you know the pain I go through on a daily basis in trying to bring you as objective of a report as possible.

Thanks to having completed and / or caught up on so many of my ongoing series, I have as implied started a new one: Powers, by Brian Michael Bendis. (Oh, so right, technically that made it kind of a known quantity? I still say my selection algorithm is probably superior!) The simple but fairly cool concept is one I’ve seen a lot of during my years of Marvel comics, only from the other side. In a world full of superheroes and supervillains, the cops still have to solve crimes, keep people safe, generally do their jobs. Who Killed Retro Girl? is a story about that, with the added twist that the big crime that defines the new partnership between police detectives Christian Walker and Deena Pilgrim is the murder of one of these superheroes. Aside from the mystery, it’s pretty much an introductory book in every way: to the world, to the characters, to their relationships, to their antagonists. So mostly, what your interest level will be come downs to whether you like them and their world or not.