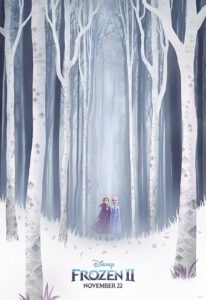 I am legitimately confused to report that I never reviewed Frozen[1]. I mean, I saw it. I even remember that where I saw it was at Laylah’s old house in San Marcos, maybe the spring after it came out? I liked it well enough, not that whether I loved or hated it ought to have influenced my intent to write a review. And the thing is, I was counting on that review to help me with this one, for what I trust are obvious reasons.

See, I liked Frozen II. I have said elsewhere that it is probably the best sequel Disney has ever made, and also that this is damning with faint praise[2]. It’s just that… I guess I just wasn’t there for the plot? It was fine, it just didn’t grab me. And in the meantime, the characters and situation were less subversive, the running joke about Kristoff’s [spoiler] was more humiliation cringe humor than actually funny to me, and the music was nowhere near the instant ubiquitous genius of the original.

I will say that Kristoff’s ’80s power ballad and the first big number in which Anna’s lyrics combined with the external events to create an instance of Greek chorus levels of foreshadowing rarely seen in modern cinema? Those were pretty great.

[1] Here I refer to the Disney movie, not the ski lift horror movie, which I did review.
[2] Fight me. Or at least, tell me an actually good Disney sequel, and here I am explicitly disallowing properties that they have purchased elsewhere. It only counts if it’s a legitimate Disney style of movie. The previous best sequel holder was one of the two Aladdin sequels, probably? I forget which.