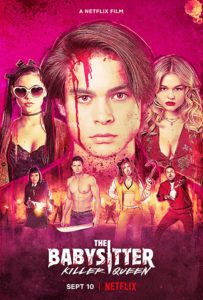 It took me so long to watch The Babysitter after I stuck it in my Netflix queue that they made a sequel! And it came out only like three months later. Go timing?

Things I liked about The Babysitter: Killer Queen, a short list:

If you liked the first one, check it out. If you didn’t, you won’t, and if you are in the supermajority of people who have no opinion here, this movie isn’t enough to tilt the balance one way or another.

[1] Cole is the kid from the first movie who was babysat.