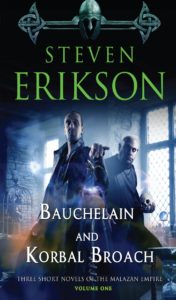 So yay, I finally finished my Malazan short novels collection, which you may remember (although, notably, I did not) I wasn’t so sure about continuing, because of a certain moral brokenness to the second story. So, good news: the third story was not like that. (Bad news: since I read those two out of order, I can’t consider the trendline broken.)

The Healthy Dead was, however, pretty silly. It staked out a position against zealotry related to exercise, good eating, and other aspects of bodily morality, and then… do you know how sometimes authors can draw up fully-realized characters on both sides of an issue and let them fight it out, and while you maybe know the author’s opinion, the debate as written was a fair one? This was not that.

It was also, thankfully, not axe-grindy, since it was written for comedic value and largely worked on that level. But you can definitely tell, underneath it, that the axe exists to be ground. Plus, Erikson’s inability to write good bit characters in his short work continues apace, which is bizarre since he is one of the best I’ve seen at fleshing out throwaway characters in his longer work.

My best guess is that he is so enamored of Bauchelain and Emancipor Reese (and I suppose of Korbal Broach, in a different way (I hope! For my part, it was nice to not see much of him in this story)) that he jealously guards them from losing the spotlight to any minor characters in their own stories.

To sum up: this is a cute little story with almost nothing to recommend it save the force of personality of its main characters, but as I usually tend to like them, that is enough to recommend it to me. But I’ll remain perfectly happy to get back to the big story.