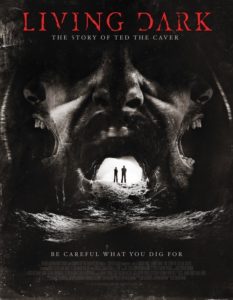 As alluded to recently, the movie I watched last night was based on a creepy internet website from let’s say 2001. Living Dark, as both said website and the subtitle of the film proclaim, tells the story of Ted the Caver, when he found a tiny passageway leading to an untouched, or “virgin” as the caving community would have it, series of caves, and decided to get in there and see what was on the other side.

The movie, necessarily, has more going on than just someone’s caving blog would. There’s a family drama tied into it, and, later, a resolution to the cave exploration. The resolution part is the problem. Partly because I liked it better when [spoiler removed] did it, but mostly because I liked it better when the website did it. There’s always something to be said for letting your imagination run away with you, and unspecified supernatural phenomena are a great way for that to happen. However, it is also something easier to get away with in text than on film, so I understand why they had to do something more specific here.

And within the constraints of an answer, this was a decent answer and outcome for a creepy cave movie to have. But the website is better.