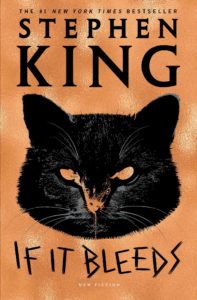 I don’t know if you know this about very small children, but they take up a lot of your time. That’s not the only reason the number of books I’ve read in the past month totals one, but it’s definitely high up on the list. But: when Stephen King arrives on my doorstep, I persevere and do the thing.

If It Bleeds is a novella collection whose stories are each largely concerned with mortality. Which is certainly timely, although I’m not sure it’s what I would have asked for as my leisure reading during the [first?] summer of Covid-19. But it also makes sense that an aging prolific author is thinking about death. Like, natural causes death, not horror fiction death, which to be fair he has always been thinking about.

The title story has the least to do with this theme; it is instead another Holly Gibney mystery story, and I liked it, but it’s hard to feel like it belonged. But weighing in at half the length of the book, it was good to not overstuff it into a full-sized book, and it had to go somewhere? As for the other stories: The Life of Chuck was the most ambitious, and while I don’t think it quite hit the mark, I have a lot of respect for the story it was trying to tell. Mr. Harrigan’s Phone continues King’s fascination with the dark cracks in modern technology through which supernatural horror can slip. And Rat is yet another in a long line of stories about authors in dire straits. But, well, write what you know, I’m told? And he is pretty good at that particular topic!

Anyway: if you ever thought he had it, he’s still got it.