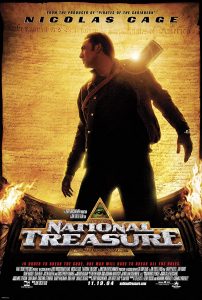 I drive. A lot. Also, I hate driving. This makes for hours per month of unpleasantness, and leads me to spend too much money on pleasant cars that improve the experience, and it leads me on fruitless searches for good radio stations, books on CD, and such. At least it used to, but now I’ve found enough good talk radio to keep me in business. Music is lame about 75% of the time, and I love a good discussion, so it was a perfect match for me, and now I find the majority of my driving accompanied by someone to argue with, even if they can’t hear my side. Hey, it’s enough to keep me awake and lively, so I’ll take it.

Which is how I found myself winning a contest on my way home after Thanksgiving, picking up the prize on Monday morning, and strolling into the theater to see National Treasure on Monday afternoon. (The other alternatives were Ocean’s Twelve, which I very much want to see, and Blade: Trinity, which I’m sure I will see at some point, if only to determine if it was a bigger techno nightmare than its sequel predecessor, but this was basically free, so a-Cage-in’ I did go.)

I haven’t seen a lot of CSI, but I’ve seen enough to know that Jerry Bruckheimer is enamored of it. I can say this with great certainty because the first third of the film was chock full of the trademark CSI speculative flashes back and forward, while l’il Nicky Cage learns to be a treasure hunter and follow those clues all over the northeastern US. Unfortunately, he’s being hounded by one-time partner Sean Bean, who wants the treasure for himself. Presumedly because he heard it contains the Ring of Power.

Luckily, our plucky everyman-with-sad-eyes hero is accompanied by WiseCracking Cowardly Sidekick and Blonde Love Interest Who Is A Strong Woman, Really, But Sometimes Just Wants/Needs To Be Rescued. All the guns and money in the world can’t stand up to a trio like that, now can they? I assume they had names, but I honestly can’t remember what they are, especially since my head is full of the lead treasure hunter being named Benjamin Franklin.

So, typical Bruckheimer flick, with the paper-thin characters, vaguely unplausible premise, and lots of cool visual scenes. If that kind of thing makes you hate Hollywood for being so carbon-copied-crappy, then this is exactly what you’re talking about. If you enjoy watching people run around being shot at, blown up, or actioned in other various ways, well, it’s Bruckheimer, and I think we all know he delivers. If you wonder why it came out in November instead of late June, then you’re just like me.

To the movie’s credit, there even is a bit of a mystery. Sure, it’s impossible to doubt that Cage will solve all the clues and elude the bad guys, but is there really a treasure at all? And is it being guarded by horrifying Egyptian (or possibly Bavarian) jackals, golems, spirits, and pit traps? For that, you’ll have to actually watch it.