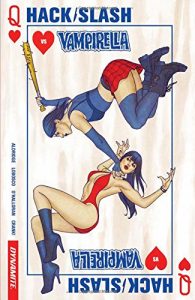 I know very little about Vampirella as a character, save that she exists and dresses… provocatively, let’s say. However, I know a great deal about Cassandra Hack, so I am qualified to speak on two thirds of the factors that went into this book.

Well, three fourths if you count the name, which is a little odd. Hack/Slash Vs. Vampirella implies that the titles are fighting, rather than the characters. And that’s just weird, right? (I mean, obviously if the characters are all good guys in a crossover, their fighting will be resolved amicably before they deal with the real threat, I’m not talking about that; ‘sjust the way things are done. But who ever heard of books fighting? Get it together, title bro!)

Okay, I’ve lost the thread. Anyway, thing one I can address is the plot, and it was, y’know, fine. Cassie and her road trip buddy / fighting companion Vlad do the thing they do, dealing with a threat that could range anywhere from “might kill some teens at  summer camp. again.” to “extinction-level event in the offing”, and they do so the way they usually do: messily.

To reiterate, I cannot address thing two, which is how was Vampirella’s characterization? Because I have no idea. Maybe Shawn Aldridge has written for her before, and maybe not. Her artistic rendering matched my vague memories of book covers past, so there’s that.

Thing three is Cassie’s characterization, and, um… it wasn’t actively terrible. I know it can be hard for some authors to correctly capture some voices. Honestly, it’s a testament to Marvel’s editorial staff over the first 25 years, that characters come across poorly so infrequently. But speaking, as we were, of Cassie’s voice… she had one mode the whole book, and it was vulgar bluster. Which is a thing she does sometimes, but honestly, the blood-spattered cheesecake in these books has never been good enough for me to tolerate a one note character, not for nearly this long. I really hope that whoever authors the next of these books has a better handle on what makes them tick. Or else, maybe this was simply a Vampirella book, and the target audience doesn’t care about my concerns at all?

1 thought on “Hack/Slash vs. Vampirella”