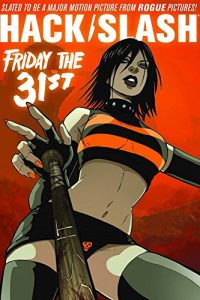 I’m not sure yet, and I’ve been… well, “burned” is a little strong, but I’ve been bitten by this before. Anyway, although I’m not sure yet, it looks like Friday the 31st marks the Hack/Slash series’ evolution from a novelty into something pretty damn cool. The character development that has always been its strongest suit (well, aside from the art) has been supplemented, in the form of people that slasher-slaughtering hottie Cassie Hack and her hulking companion Vlad have saved over the past couple of books, who are now banding together and offering to help out with finding new problems to solve and people to save.[1]

And at some point, I guess the series got picked up by a publisher, because after a normal one-shot (though, also as usual, continuity-influencing) issue co-starring Chucky[2], the book collects the first two storylines / four issues of the monthly Hack/Slash comic run, still apparently ongoing. The first storyline serves as a reintroduction to the characters and premise for people who might not have been aware of the haphazard schedule[3] under which all the one-offs were printed, and the second features a Cthulhian death metal band and more virgins than you can shake a stick at. And since there are at least two more books yet to go, I’m certainly looking forward to what they throw at me next. I mean, in several months when I read volume 4. Not literally next.

[1] And helping out with any unexpected costs or emergencies that might crop up. If the first such emergency and offered assistance is any indicator, I’m going to like the new Scoobies. Both directly and thematically.
[2] Yes, the evil doll.
[3] And probable spotty availability; though in both cases, I am purely speculating here.