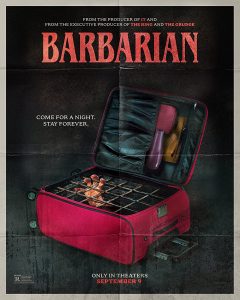 To get it out of the way, Barbarian is not a dark fantasy piece like I originally thought from my very vague awareness that a horror movie with that name existed. What it is, I think, is an early entry in an upcoming wave of airbnb-themed horror movies, in much the same way that Hostel kicked off a wave of vacation-themed horror movies.

I hate to say even that much, as this is a movie that pivots a lot of different ways, but so far I’ve spoiled you only for genre and the first 120 seconds of the film, so it’s not as bad as it sounds. Well, except for the part where I’ve also said it’s not a straightforward… anything, really. So go see it, if pressure cookers are your kind of thing.

If you do see it (or don’t care about impenetrable spoilers), more below the cut.

So, movie titles. Like, who was the barbarian? Was there specifically a barbarian, or was it just a clever title? I joked outside the theater that the real barbarian was the friends she made along the way, but… y’know, it’s kind of true?

Either way, I am not a fan of movie titles that remain opaque after I’ve seen the movie. Feels pretentious.

Regardless, my days of wanting to buy cheap Detroit real estate are certainly coming to a middle. …which is probably not the correct lesson from the movie, and yet.