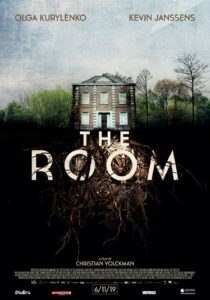 The Room grew on me, both over the course of the movie and possibly in retrospect over the last few days since I watched it as well. The premise at first appears to be a pretty by-the-numbers riff on the monkey’s paw. A couple moves into a stately, remote farmhouse and while doing renovations finds a secret room, which they quickly (if a little implausibly) learn grants wishes. Wish for something in the room, poof, it appears. Then, for a good 10-15 minutes, the whole movies appears to be about to collapse into a Lynchian commentary on bored American decadence[1], but before this can happen, someone wishes for the kind of thing that you maybe shouldn’t ought to wish for.

And then, mere moments later by the plot clock, the terrible rules of how wishes in the room work are finally revealed, and what follows is a slow burn escalation of bad decisions and impossible choices.

I’m carefully staying away from spoilers (unlike imdb’s three sentence description), because I think that not knowing what was coming is the majority of what makes the movie work. But outside of the identity horror and other bad things that the writer went for, I think the real lesson of the movie is that if I had a wishing room that followed these rules… Sure, I wouldn’t be able to instantly and safely retire[2], but I’m pretty sure I could make a happy and comfortable life for myself without very many needs to be met.

Because I would not make terrible, obviously doomed to turn out badly wishes. That’s why.

[1] Not that any of the characters are American, going by accent. But it definitely has that jaded feel, in the moment.
[2] The IRS alone, you know?