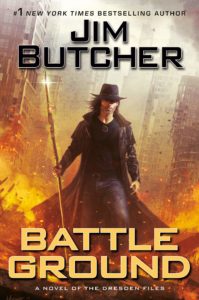 I have logistical thoughts about Battle Ground. Because it’s obvious that this and Peace Talks are in fact one book. Sure, there are one or two structural plot elements to make them feel like they are each a whole book, and that’s a good thing; but if you rearrange those or ditch the plot elements leading to them, you don’t hurt the overall story of the proposed single book. But man would it have been an enormous book, you know?

All that to say, a three month gap between these books is not bad at all[1], so I’m not complaining exactly, but the delay to get here was… also not insane, but it was large, and what I’m really saying is it reminds me of George RR Martin’s scenario writ in miniature, except you’ll note that after his split in two single book, he never wrote anything else again. So I’m concerned, is the thing.

But back to this actual book. This is a title that delivers. I mean, I guess they both are? Peace Talks was easily 80 percent or more a book about all of the Accorded Nations getting together to hash out a peace, while they could[2]. And Battle Ground is about the moment when that ticking clock has run out. So if what you are looking for from this book is an all out war between Dresden and allies vs the bad guys de l’année, I can assure you that you will get it.

And while you’re getting that, you’ll also get a great deal of broader plot events and character development moments. From all kinds of characters and all kinds of plot directions. This is a legitimately huge book in the greater sequence of the Dresden Files series, and I’m still all wrapped up in it. I know people have turned away from these over the past decade, but for my money, it’s still a very solid piece of story-telling, and I will continue to find out what happens next for as long as I’m able.

More below the footnotes + cut, to be considered at least mild spoiler territory, mostly for the series rather than the book.

[1] Especially at the rate I’ve been reading this year, which is to say that my three new summer books took me basically two thirds of a year. Look, things are and have been weird.
[2] Some of them, it occurs to me, with vastly more hypocrisy than others.

I started to add “unless something major changes” to modify how long I’ll read the series, but the truth is something major did change in this book, and I’m pretty sure I’m very unhappy about it. It’s not that I think it was wrong in an authorial sense, although there are arguments to be made, despite how heavily Butcher lampshaded his ability to dispute those arguments.

I just mean, from a development of the rest of the series perspective (and we’re at about the 2/3 point, as I understand it), I don’t like it.

Entirely separately from that, though, Marcone. Here’s what’s weird to me about Marcone. It has taken me this long to realize that he’s the main villain of the series. Like, okay, yes, there was an entire tribe of vampires, and sometimes there are Queens of Fae, or dragons, or titans. So, why Marcone? Because he’s Harry, through a different lens. They’re both just guys from Chicago trying to do the best as they see it for themselves and their city. Sure, Marcone is a criminal, but that’s not even the point. The point is, they share a different opinion about what’s best, and they keep finding ways to match each other point for point as they level up to face the threats in store for Chicago, and to be able to counter each other.

It’s a hell of a long arc, is what it is, and I imagine I’m the last one on the block to have noticed it, but nevertheless: solid.