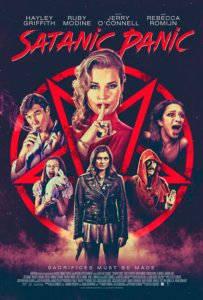 I’m going to cut straight to the chase here: what Home Alone did for burglars, Satanic Panic does for devil worshipers.

You have no idea how much I want to just stop there, but I feel obligated to say at least enough that the text reaches as far as the poster, you know? So, this is basically a lazy comedy of errors in which the pizza delivery girl rides into the rich neighborhood hoping for a big tip, and instead finds herself entangled with Satanists on the night of the annual(?) sacrifice, and hijinks? Why yes, they ensue.

Despite my diss above, it was actually pretty funny. It’s just that the plot doesn’t make a lick of sense. But the pizza girl’s wide-eyed innocent irritation makes up a lot of ground, and with all the blood splashing around and the fish out of water laughs and the bumbling, ineffective devil worshiper laughs, I didn’t actually care about how nonsensical the plot was.

Basically, if you’ve always secretly believed that rich people are not like you and me, because they got their money and power as a result of sacrifice rather than hard work, and also that they hold orgies on the full moon? (And who hasn’t, at one point or another?) If so, whoever made this movie made it for you. Also, I learned in the last scene that this was made in Dallas, and yeah, if I was going to pick a city where that is what the rich people are like, Dallas or LA would have been the coin toss. (I know, I know, you’re thinking, what about Houston? But the climate was survivable, so Houston was already off the table.)