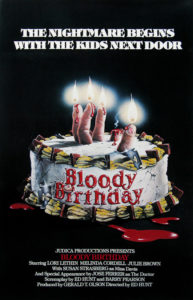 Bloody Birthday is one of the best standalone ’80s horror movies I’ve seen in a long time. See, there are these three kids who were all born on the same day, during an eclipse. And now it’s ten years later, and those three kids are stone cold killers. Do you really need anything else?

The answer is mostly yes, if what you need is a series of pretty good kills, gratuitous teen sex, gratuitous peephole of Julie Brown’s[1] bedroom, an extended game of cat and mouse between three 10 year olds and their babysitter but in the opposite direction of usual, and the nerdy sidekick from Parker Lewis Can’t Lose, a show which let’s be honest nobody remembers ever existed, in the darkest, most hardcore role of his career.

Or, if you need an astrological reason for the soullessness of the murder trio, man, the answer was no, you did not need that, and especially I did not need that. That is five minutes of dialogue and footage I will never get back, during which the murder kids could have found another teen sex to coitus interrupt with another creative weapon. Alas.

[1] Earth Girls are Easy and “The Homecoming Queen’s Got a Gun”, not the VJ.