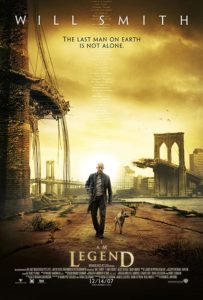 Far back in the mists of Delirium’s history (er, the site, not the girl), I read I Am Legend by Richard Matheson. He fills in one of the final gaps between the old school horror of Poe and Lovecraft and today’s modern horror renaissance birthed by Stephen King, and yet until just a few years ago I’d never heard of him. He is certainly to my liking so far, and it was with a fair amount of excitement that I heard I Am Legend was being made into a movie this Christmas. Plus, I like Will Smith a lot better than Tom Hanks, so it’s nice to see him in the role of last man standing. But I suppose that’s getting ahead of myself?

The premise of the movie is as follows: in late 2008, a viral cancer cure has just completed successful human testing and is poised to flood the market. Cut forward three years later, to where Dr. Robert Neville is a man alone in Manhattan with only his dog and department store mannequins for company. His days are spent hunting for food, watching DVDs, presumedly siphoning gasoline and maintaining his cars and generators off-screen, trying to develop a cure in his underground laboratory, and broadcasting to any person alive who can listen that he can meet them at the harbor at noon, that they are not alone. His nights are spent huddled in darkness behind metal shutters, praying that tonight isn’t the night the things that roam the darkness will find him.

The first two thirds follow Matheson’s book thematically if perhaps not event-for-event. Neville is driven to find some way out of his exile, whether via the message he broadcasts on all frequencies to convince himself that someday a non-infected person will appear, that he isn’t truly alone, or via his attempts to find some kind of cure, to bring back humanity from its rapid decline, huddled in caves by day and ravening through the streets in search of food (or explicitly in search of Neville?) by night. And Smith does a great job of conveying the drive, the despair, and yes, the subtle edge of insanity that is only barely being held off, one day at a time. The final third’s variance from the story would of course be a spoiler to explain from either direction, but suffice it to say that as interesting as Matheson’s conclusion was, the movie provided a much more reasonable ending for a screen. I mean, that sounds obvious, right? My point is, Matheson’s ending works well in a book but would fail horribly in a movie. The media are too different, in this case.

Also: someone involved in the writing of this script appears to have a vendetta against me, as with but a minor change one sequence of events would have been not just as horrible as it was but instead have actively ruined the movie for me. So, that was mean, mysterious writer guys and lady!

2 thoughts on “I Am Legend”