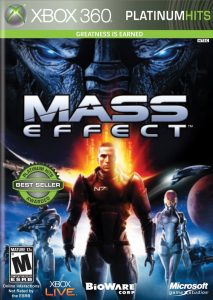 One sign of an extremely good video game is that it would be almost easier to describe it as a movie and leave out the game elements entirely. Well, okay, that may not be true. But if the reason you want to leave out the game elements is that they were so seamless and non-intrusive that you only very occasionally even felt like you were playing something instead of watching it and influencing the outcome, that would be good. It would also be a good sign if your father, no stranger to games even if he’s not the gamer type, were to ask you after watching the last 15 or 20 minutes of the game to clarify that it was in fact a game, and not a movie.

And looking at it like that, Mass Effect is an exceptional game. Short centuries from today, humanity has spread out into the solar system only to discover relics of an extinct race that had observed our solar system 50,000 years ago and left behind technology we were quickly able to make use of. Now the mass effect drives have unlocked the galaxy for rapid exploration. And of course, we are not alone in the discovery, nor are we the first. And so, at a moment when humans are accepted as an important member of the galactic community but are clamoring for a chance to be more involved in the governing and policy-making of that community, opportunity arises in the form of Saren, a Council agent gone rogue who has just unleashed a rain of death upon a human colony and garden world in the form of his AI allies, the Geth. Now, the principle character of the game, Commander Shepard, must marshal diverse resources to hunt down Saren while unraveling the mystery behind his motivations and goals. At the very least, humanity’s position in galactic affairs is at stake for years to come. And it’s always possible that the stakes could be higher still.

Mass Effect is an RPG, in the style of Baldur’s Gate or Knights of the Old Republic, not Final Fantasy. That is, created with conscious effort to be reminiscent of tabletop RPGs, if they were played by one player instead of several. In the general course of events, I can only get so much enjoyment out of those games, because the micromanagement gets in the way of the pure joy of playing. And sure enough, the inventory system is an exercise in frustration, both because of the limit on how many things can be kept and because of the horrible ordering system. This kind of thing results in the games taking ages to complete if I ever do, and any justified sense of accomplishment comes tainted by the lack of consistent gameplay over a short period of time. That is, these games take me months or years to complete because I get bored of all the between-time work I have to do, so I play something else for a while instead.

Except, contrary to expectations, I’m about to proclaim joy instead of hardship. The majority of the game was put together explicitly to minimize these kinds of micromanagements, even if the inventory part failed. Instead of pausing and selecting enemies for combat, everything is played out in real time with a third person movement and cover system reminiscent of Gears of War that simultaneously allows growing character skills to matter while providing direct control over the flow of combat. The dialog system was primarily about setting the tone of your character; not what does she say, which is for the most part scripted (though there certainly are important choices scattered throughout the game), but how does she say it: with an eye toward politics and goodwill? Strictly official to get the job done, irrespective of the opinions in his head? Or with a giant chip on her shoulder, trying to cut through the pointless bureaucracy? And there are more tones, of course. So, my point is this: RPGs in general are only so entertaining to me, but Mass Effect was spectacular. Even the simple brilliance of Portal has such a different focus as to make them non-comparable. If it wasn’t for BioShock, Mass Effect would unquestionably have been my favorite game this year. (I really need to finish BioShock. Like, a lot.)