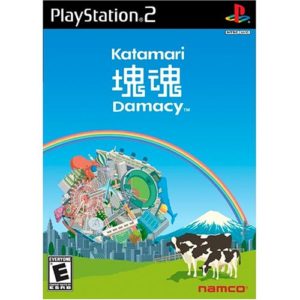 If I had to pick one game in all the world most likely to have universal appeal, Katamari Damacy would be it. There’s no part of it that has a downside. Well, okay, it’s perhaps too zany for some people. There is an undeniable zane element happening. And perhaps not everyone in the world likes Freddie Mercury. I’m willing to believe that’s true. But the King of All Cosmos is merely flamboyant, not actively gay. After all, he has a wife and a wee little son. So certainly the anti-gay lobby cannot complain here. Mothers Against Drunk Drivers might have a certain reasonable issue, what with all the stars in the sky having been destroyed. But nobody actually mentions alcohol so far as I can remember, and anyway, it’s not like anyone got hurt. Plus, the whole point of the game is to make it right again. So, basically, yeah. It’s the game for everyone!

Here’s what it has: a simple interface that anyone can pick up without ever having touched a video game in their lives, as long as they have working opposable thumbs; an engagingly quirky storyline following the crossing paths of a family of lego people and the family of the King of All Cosmos on a particularly fateful day; a brilliant Japanese pop soundtrack; and the ability to roll up things. This is both the simplest and the hardest to explain concept I’ve come across in quite some time. You take a roller ball, which we call a Katamari, and you roll it around the earth, where things that are sufficiently smaller than it will stick to it. Things sticking to it makes it grow, so that you can roll up larger things, which in turn make it grow faster, and so on. It may seem to you, the uninitiated, as though rolling up things is not a particularly interesting task. I am here to tell you that it is not merely interesting, but actively fulfilling in a way that allows for nearly infinite replayability.

That said, I have not made the North Star, and I find it unlikely that I ever will. But this is due to impatience rather than disinterest. Seriously, though: universal appeal. If you do not have it and either have or can afford a Playstation 2, get this game today, and then play it. A lot. (But then, having played it once, I feel confident that the ‘a lot’ is an inevitable outcome whether I specify it or not.)