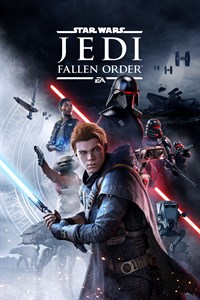 It’s not uncanny valley levels of weird, but it is nevertheless weird to see digital animation versions of real actors that you are already very familiar with. To wit, Cal Kestis, who is played by the Joker from Gotham and one of the Gallagher kids on Shameless. And he’s, like, just extremely recognizable, both character and voice. And in Jedi: Fallen Order[1], I’m controlling his jumps and pushes and lightsaber swings, and it’s weird, is what, in a way that a random character would not have been at all.

The game itself is… fine? As has been said by others elsewhere, it’s basically a modern Tomb Raider ripoff, but without that part of the gameplay being as polished. Tradeoffs are that the Force skills parts are in fact pretty cool, and that the plot eventually slides from generic to compelling, somewhere between the halfway and two-thirds point.

If you feel like those tradeoffs (especially the second one) aren’t good enough to make up for the initial complaint, well, I will not try to convince you otherwise. Even for me, as happy as I was to be doing a new Star Wars game for the first time in forever, I occasionally wondered if it would really kill the high and mighty Jedi to pick up a blaster sometimes, instead of fighting through another four or six hand to hand storm troopers.

But the Force skills are pretty cool, except when your Force meter runs out and you can’t use them anymore. And except for wishing you had access to them for the whole game, instead of only starting to get to the good stuff right at the end. (But that’s a problem with all games of this type. See also Ezio re-learning how to be an assassin in two sequels.)

[1] which EA would like to helpfully remind you is a Star Wars property, no matter how awkward it makes the title of the game I am returned, triumphant, from my long sojourn of, er, not writing the last two reviews I have owed. And if that doesn’t really sound like all that much of a Journey, it’s because I’m trying to create a parallel with my unfortunate experience playing a short indie game of the same name.

As you can see, last weekend was heavy with the light & easy games set, which… it did not convince me that small games that last a couple of hours is the way to go, but it certainly highlighted how much easier they are. I mean, yes to play, because you can’t write a particularly hard game that will only last 90 minutes, but especially I mean easy to find time for the playing of. Which is important! I can say anything I want about how much more I enjoy Dragon Age, but if I keep not turning on the XBox to play it, that claim rings pretty hollowly.

The irony is that Journey would otherwise be the perfect game to draw that comparison with. See, I finished it in about 20 minutes. You start out as a Jawa-looking dude[1] in the desert, climbing up a hill. Eventually, you see in the distance what look like places to go, and then you go to them, because you’ve ever played a videogame before. After doing some things in the desert which may or may not have any particular long-term relevance or unlock insightful cutscenes, you go through a portal to a snowy mountainscape. Or at least I did. After some additional snow-doings that may also have some kind of relevance or unlock some other set of cutscenes, a finale occurs. I can only speculate about all these things[2] because what happened to me was as follows: I collected a couple of glowing things in the desert, tried to take them back to a platform that looked like it might have been missing some glowing things but instead accidentally fell through a portal onto the mountain (was there a way back? I’m told yes, but it didn’t look like it) where I climbed for a while, turned right, dodged a (let’s say) dragon, climbed some more (briefly the climbing involved a Shaolin temple), and then after some brief spoilers[3], the game ended.

I’m pretty sure I did something wrong? You would think, in a game whose title explicitly alludes to the destination not mattering, it would not be so easy to perform a speed run, much less without intending to. Oh well. Perhaps I’ll play it again someday, when the memories have faded.

[1] Or possibly lady! If you’ve seen a Jawa before, you know I’m impressing my own opinion without any particular evidence.
[2] Well, not only speculate. I have hints from my incredulous host to go by as well.
[3] I’m taking it on faith that there were spoilers to be had. It was, from my perspective, merely an inexplicable happenstance.

Having covered the media I consumed whilst packing and then waiting in the airport for hours on end to die, violence and bloodshed hounding me from every quarter, it feels only right that I should have found a calm, meditative game like Flower to ease my mind as my weekend in the wilds of Danville, CA progressed. And it feels all the more right that I was playing a game in which dull, lifeless yellowed or grey fields should transform into lush greenery under my expert controller-tilting when you consider how similarly yellowed were the steep hills surrounding the house on all sides. (But seriously, there’s something incredible about the sunlight, and especially the afternoon’s last gleaming, on those too steep hillsides, dotted now and again with lone trees.)

So, there’s this game for the various Playstations (I did it on the 4, but there are other options) in which you are the wind, and you move flower petals around. And… that’s the whole game, basically. If your gust of wind passes over a new flower, you get one of its petals, until you are eventually a whirling maelstrom of color and delight, rushing across the landscape, transforming it as you go. Then later, there are some blasted urban cityscapes, and, let’s face it, if it were not so calm and beautiful, it would be an environmental screed.

But, while it did not end up feeling screedy, it was certainly environmental, and there’s really not a whole lot else to it, except for being pretty. Still, it was fun. Or maybe I was just very amused by the ten-year-old with whom I was sharing the controller and his claims of knowing how to embrace the flower. At first, it was a zen koan that deepened my attachment to the game; by the time I realized that “embrace the flower” was simply code for “I’m playing this game better than you are”, the attachment already existed. The more positive Amazon reviews say that the game has a different, deeply emotional, experience available to each player. I suppose this counts as that?