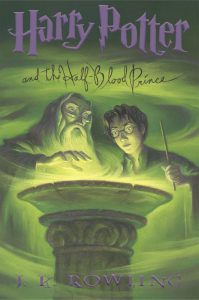 Over the past couple of years, I’ve become gradually aware of a thriving internet fandom community for these Harry Potter books, complete with wars over which person should date which and extensive fan fiction. To my very great delight, I’ve completely avoided all that smeg, and this review will be completely uninformed by that section of the internet. It’s all about me, baby! Also, I’m not sure how to discuss it in any real detail without a spoiler cut. So, if you haven’t read the book, or if you haven’t read the series but might someday, stay out from this point on. (Includes spoilers for previous books as well.)

To the extent that Order of the Phoenix was about the rebellious teenage phase, the Half-Blood Prince was about Harry passing the cusp of manhood. In every book to date, Harry and his friends have misperceived the events swirling around them, muddled through with a combination of skill and luck, and then there was the big chapter in Dumbledore’s study where he’d explain what was what, and the audience is left wondering why Harry never learns to listen to his teachers, or at least confide in them.

This time, the tables are turned. Harry reports his observations at every turn to any adult he can trust (and of course his friends), yet nobody seems concerned by what he has to say. Naturally, therefore, he’s right. Now, I’m not sure that there’s anything that happened that suddenly made his observations more valid than in the past. I suppose what makes it work is that in the past, if he’d confided in everyone, they could have explained what was really happening. This time, nobody has an explanation, just a refusal to accept his evidence. Sure, it’s kind of a shortcut that this time the same eyes see true where they never have before, but it’s a kid book, so that’s fine. Especially as that’s my only real complaint.

The interrelationships were well done and realistic (despite what uproar I hear from that other internet enclave I mentioned earlier), the teenage angst was toned down with maturity, but still present. The climax and denouement each packed exactly the right punch, even if she did steal that last scene or two from the Spider-man movies. It’s been most of my adult life since a series in progress has been a book away from ending, so this is perhaps not a fair assessment, but: I’m not sure I can remember when I’ve looked more forward to the end of a series of books.

I said earlier that the spoilers were throughout above, because to discuss theme, I had to spoil the process. This will spoil specific events, so if you came this far without caring, you still may want to stop now. That out of the way… … … okay. So, I’ve heard rumors that originally the Chamber of Secrets was meant to have the name of this book instead. As a result, I kept expecting the Prince to be Tom Riddle again. Obviously, it was Snape instead. There’s nothing about Chamber of Secrets that indicates Snape as the character in question. So, I expect that originally Tom Riddle would have been that character, and Rowling altered the history in order to make Snape’s mother Prince, rather than Riddle’s. Nothing really special there, just thinking out loud, except: it makes me wonder if Snape was meant to turn on Dumbledore all along, or if she changed her mind along the way. (Of course, I also wonder if there’s some chance that Snape acted as he had to to preserve his deep cover, knowing that Dumbledore was doomed in any case. Unlikely in the extreme, but not out of the realm of possibility, I think. Her twists have been as skillful before.) Also, I’ll be rereading these at some point, but until then, if anyone happens to know who R.A.B. is offhand, I haven’t thought of anyone with those initials in the story yet.

Lastly: Hooray for another case of zombies in pop-culture!

3 thoughts on “Harry Potter and the Half-Blood Prince”