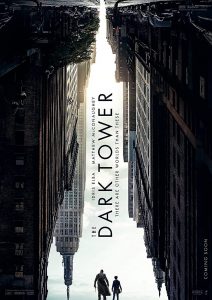 With this movie knocked out so quickly, we’re back on schedule, hooray! I mean, we are if we also watch this week’s movie this week, but at least it’s mathematically possible to. Anyway, last week’s movie theme was Stephen King adaptations, which, there are certainly many I haven’t seen, no matter what you might think. However, the most glaring hole is the troubled[1] Dark Tower adaptation from a few years ago, so, we acquired that and checked it out last night.

The problem, I think, is one of expectations. Because this is clearly and obviously not an adaptation of the book or series of The Dark Tower that Stephen King wrote. It has several identical character names, some of them attached to similar characters, even. But the driving arc of the movie is not merely different from but antithetical to the driving arc of the books. So you’ve got a fantasy movie with a built-in audience who you’ve immediately alienated, and what’s left is a movie that would appear to be impenetrable to a generic audience, even though that was not especially the case.

What I could see was a humorously slapdash attempt to make this movie the linchpin of the SKCU[2], even as the series is the linchpin of his library. And I mean, it was less a successful linchpin making and more a constant game of “spot the reference”, but it was also a fun game of that. I caught a lot of them, while being pretty certain I must have missed others. And this is not enough to make a good movie, by a long shot, but I kind of think that if they’d made a more concerted effort, it could have been pretty amazing.

Anyway, long story short: There’s a boy, Jake, and he is having apocalyptic dreams about a man in black who wants to destroy a tower, and every time he attempts this in Jake’s dreams, geologically mysterious earthquakes strike all around the world. But then Jake has a dream about Roland, who is a gunslinger, and who can possibly stop the man in black from succeeding. And then Jake gets swept up in events, and there’s a movie.

I said early on that all of the characters were subtly or dramatically wrong, and I stand by that. But if I didn’t know anything about the characters or their motivations in advance, these would have been acceptable. Idris Elba played his role well and somewhere near the two-thirds mark, they finally convinced me this really was Roland Deschaines, just from an alternate universe with a wildly divergent backstory. I guess what I mean is I liked the movie for what it was, but am sad that they squandered what it could have been.

[1] ie, it was a commercial and critical flop
[2] It is important here for me to note that there is not, in fact, a Stephen King Cinematic Universe.