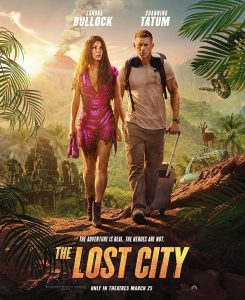 What if you wrote a romance novel about being a romance novelist whose life is devoid of romance, but then you crossed that with Romancing the Stone from the ’80s, which is more of an action comedy than a romance novel, but then you also noticed that hey if you’re crossing it with a movie anyway, you might as well make your novel a movie instead?

Also, maybe your inspiration for writing a novel about the thing you ended up making a movie about instead came from those Bones novels, so you should probably make your novelist an expert in the field of whatever will allow her to go out and do actiony treasure hunting a la the movie you decided to cross your romance novel with.

Also, you are just on board with everything Daniel Radcliffe has done since he got out of his Harry Potter contract.

In the unlikely event that you’ve done all of these things: congratulations! You’re going to get sued by the people who made The Lost City, for flagrant plagiarism. That sounds fun!

All of this said: I’m not coming down on it. It for sure has an aesthetic and knows exactly what it’s going for, and you might hate that thing, but if you do not, this is a pretty funny and moderately sweet example of said thing.