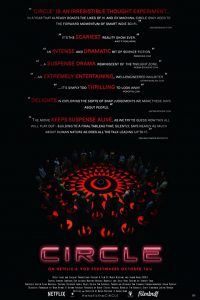 Outside of it showing up on one of the random tabs of movies that Netflix wants me to endlessly scroll through, I have never heard of Circle. And yet, whatever the description said and / or the Netflixised movie poster looked like was sufficient for me to add it to my queue. And now, an unknown number of years later, here we are.

So, as to what it actually is? It’s a weird amalgam of 12 Angry Men[1] and Survivor[2], with lightning bolts. See, there are dozens of people who wake up standing on white circles in a black room, and also they themselves are arranged in a circle[3]. And then they start dying. And then they start realizing why they are dying, and start bargaining to live longer.

The movie proceeds in real time, and could have been a play or a single take, except for all the special effects involved making that seem like sheer misery for everyone involved. It has no payoff as to what is going on or why or what happens next, but if you are in it simply for the human drama of seeing who will do or say what, a microcosm of people trapped under glass like ants, going about their lives (if their lives were spent weighing morality versus survival), then it works pretty well!

I both liked it and would not especially recommend it. I semi-wonder if watching a second time knowing the outcomes would make me walk away with a different take, but that’s not going to happen.

[1] the 1957 movie, or take your pick as to a newer version or stage version instead.
[2] the reality show
[3] Imaginative Titles R Us