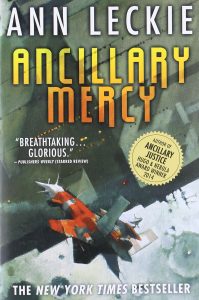 I finished Anne Leckie’s Ancillary trilogy yesterday, and it comes with a realization that I had completely failed to anticipate what the story was actually about.

Which is to say, now that I know what story I was actually reading, the trilogy does in fact have three strong, reasonably divided acts that tell exactly the story they were always telling, even though it took me until the end of the series to correctly order things in my own head and be able to see it clearly. Also, it’s a good story that I’m happy to have read, even though I’m sad I’ll probably never get a clear look at either the millennia old beginnings of the story nor the equally distant ending of it.

Perhaps because of my inability to grasp the picture until so late, I’m particularly spoiler averse here, so I will say only that issues raised in each of the prior books are well-resolved in Ancillary Mercy, and with more room than you can shake a stick at for Leckie to return to this universe and tell other, completely different stories, were she of a mind to.

[1] It’s not impossible for it to be both, but I doubt I’ll ever know.