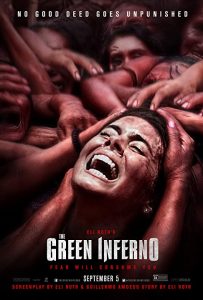 The Green Inferno is an homage to Italian cannibal cinema, and judging by when I saw Cannibal Holocaust last year on Joe Bob, it’s a pretty successful homage at that. I know I spent a lot of time wincing, and it’s hard to say how much was due to memories of the source material rather than this one. See, these college students have gone to Peru to stop some bulldozer-style exploitation of mother earth, with chains and cellphones and the internet, and that’s all fine and good, but what happens if circumstances arise and they find themselves hanging out with the very people they were ostensibly down there to save from encroaching modernity?

It’s hard to tell where the line between homage to past exploitation and actual exploitation lies, but focus on the characters kept me from thinking this was just done for the sake of a cheap buck at the expense of indigenous peoples. There was sequel bait, and I’m really torn between wanting to see the sequel and thinking that the genre has been capstoned and should stay safely dead and buried.