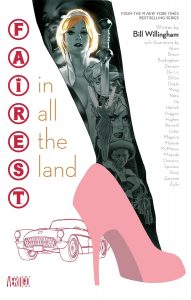 The last Fables story was also a Fairest story, I guess? Also, the last actual Fables story was kind of a big deal, with repercussions still echoing around the margins. (These are the margins, since this wasn’t a main sequence story, you see.) Downside being, I read that a year and a half ago and only barely remember what happened. Which beats not remembering at all, don’t get me wrong!

Anyway, echoing repercussions aside, Fairest in All the Land is a murder mystery in which a certain mirror that may be evoked by that phrase and Cinderella (who has previously been the star of her own Fables spin-off spy series) square off against… and here we run into a wall called What Exactly Do You Think a Murder Mystery Is, Anyway? But the victims are a who’s who of, er, the fairest… in all… you know what, I’m going to pretend like I didn’t just get that reference.

Plot and plot arcs aside, this book was weird. It’s not that every story segment was drawn and colored by different artists. It’s that the story segments on average lasted three pages each, which… it’s just too many hard corners, is the thing. Whiplash, I’m saying. But the plot was fine, as was the plot arc progression. (And whoever was the artist for the bits that included the Page sisters is good at drawing the Page sisters. Sexy librarians equals best trope.)