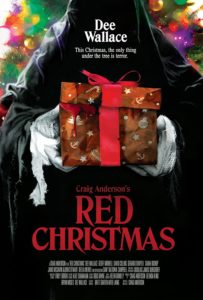 Red Christmas is an Australian horror movie which, with the numbers filed off, is a fairly decent flick. Family gathering for Christmas Day, except a weird guy in bandages and a black hooded cloak shows up to settle some history with Dee Wallace[1], with the result being blood and gore and, you know, the various types of things that would make your Christmas red. (It sure wasn’t going to be white! Australia, remember.)

Unfortunately, the numbers are not filed off, and I have not been this unhappy with the premise of a movie since Snowpiercer. Said premise, which you cannot help but be aware of if you watch the first bit of the movie interspersed with the credits, is that the mysterious stranger is in fact an aborted fetus who survived. The implicit lie already had me on edge, but then the rest of the movie, despite making a valiant effort by naming this character Cletus, leaned into the “storytelling possibilities” by making it horror mashed up with family drama, instead of just horror, and offensive family drama based on a pure falsehood of a premise is just… I’m still pissed, is what.

This is a terrible movie that should feel bad and no longer have its rights sold. Shame on you, Shudder + AMC.

[1] Unlike most times when I see Dee Wallace’s name somewhere, this really is the lady who played the mom on ET, instead of secretly being Dee Snider instead, who did not.