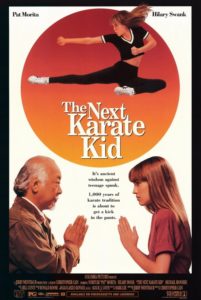 Cobra Kai arrived on Netflix a few weeks ago, and now that I’m back at work (a future month of paternity leave yet remains to me, which I will use later, hooray) I have a lot more time to watch TV[1]. Which means I watched all four of the Pat Morita Karate Kid movies this week, three of which I had previously seen. (And all three of which I would recommend refamiliarizing with prior to Cobra Kai, which I also recommend. It pays off, is all I’m saying.)

Then there’s The Next Karate Kid, in which Pat Morita is hanging out in Boston with the wife of a deceased WWII buddy after a big 50th anniversary of their war heroism ceremony, and then for reasons that do not bear looking at too closely, he’s left in charge of her high school granddaughter for a few months. If you guessed that what she really needs is the kind of discipline and confidence that karate can provide, well, that has pretty much covered every salient point of the movie.

That said, Mr. Miyagi is a hell of a character, and the monk interludes are worth the price of admission, even if plot points such as “why was this a good idea, conceptually, to leave a Okinawan stranger in charge of a teenaged girl” and “how could any school possibly allow a random military guy to put his own private student army in charge of the other students” are truly inexplicable.

I’m not saying go watch it, but there’s good stuff in there if you did. I miss Miyagi all over again, thanks to this big giant rewatch fest.

[1] Unless it has subtitles. I actually am working, and you can’t watch the screen nearly enough to keep up with a subtitled show or film. That’s just math.