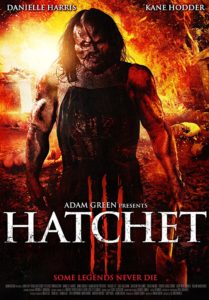 Later, they made Hatchet III.

I really respect where this is going. The movie starts on the morning after Hatchet II, which is to say two mornings after Hatchet. This is still one continuous narrative, even if one character has changed actors and one actor continues to show up as new characters. But then, that latter is part of the joke.

Another thing I appreciate is that they got the urge for overwhelming gore out of their system last time, so this one could be funny again. And it was. Possibly made even more funny by catharsis based on recent events, but watching Victor Crowley versus a Sheriff’s Department and also a SWAT team? I may well have found myself fascinated for twice as long, if he’d just kept killing people in new and inventive ways. (Just like in real life, I was sad for the one to possibly three of them who didn’t deserve what they got.)

Basically, if you like slasher movies enough to find them inherently funny, and want to watch modern films by someone who loves the genre just as much, and is in on the joke right along with you, this is a can’t miss series. Each entry adds just enough new material to not feel like a retread, while otherwise entirely being a retread, just as God and John Carpenter intended.

Unlike last time, though, I’m actually not sure how there’s room for another sequel. That actually felt like the end?