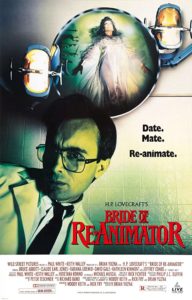 Sad thing number one: I do not have a review of Re-Animator, since I first watched it in its entirety on Joe Bob’s show, and it seems wrong to write reviews for movies I watched with a commentary track (essentially) by a different reviewer. But suffice it to say it was pretty great.

Bride of Re-Animator is… well, it’s not the world’s greatest sequel. I had a whole rant prepared here about how people keep calling these comedies. And I mean. Jeffrey Combs’ turn as Herbert West, the research doctor who keeps trying to perfect his re-animation formula to defeat death, is reliably hilarious. But a funny character does not a comedy make, when the rest of the movie is so dark and serious and tragic, I would have said.

But then I started thinking about things like how annoyingly extraneous I found the cop who was still trying to solve the mystery of the massacre at Miskatonic University last year, only he gets too close to the truth and ends up dead then not-as-dead, and now he’s just an annoyingly non-funny slapstick obstacle for our heroes(?) to overcome, and… oh, that’s what they mean. It’s comedic, it’s just not funny and fails to match the tone of the rest of the film. And the first movie was like that too!, except the funny things were in better balance and were actually a little funny, whereas this is all, cool plot, but you forgot to make the funny parts, so I’m just going to shoehorn those in now, okay?

All that to say, sad thing number two: If they had let West be funny and left the rest of the movie as the slow devolution into tragedy of the other main character, who had survived his tragedy of the first film mostly intact, this might have been a great sequel. It is perhaps obviously also a re-telling of Bride of Frankenstein, and those parts work until the end, which fell a little flat. But I think I have to blame that on the shoehorned comedy disrupting the tragedy too much.

Don’t get me wrong, I still liked it. Almost entirely on the strength of Combs’ West, sure, but that was also true of the much better first movie. Because he’s just such a great character! …but probably don’t be dead or have a potential to be dead anywhere near him. He’s, uh, definitely more into science than morals.

1 thought on “Bride of Re-Animator”