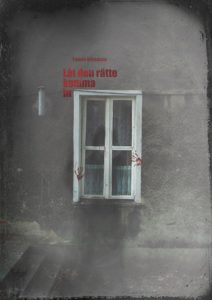 This weekend, it has been all about the subtitles. After rolling out of work a little early on Wednesday, I fought traffic and a driving blizzard to get to the Angelika in time for Let the Right One In. Plausibly, there was no snow of any kind until the movie started; it’s hard to remember? In any event, there was plenty of snow to be had from the moment the credits rolled. And not just because the movie was set in Sweden, which presumedly is not locked in winter ice twelve months of the year.

Oskar is a bullied 12 year old boy and child of divorce, alone in his apartment most of the time, wishing for the courage to stop his oppressors, and already visibly embittering at his inability to do it. Into that unchanging snowscape arrives a man and a young girl, Eli, who have moved in next door. While Eli and Oskar begin to learn about each other and fumble toward friendship, the man is wandering the woods with his serial-killing kit, draining blood from his victims. Oskar’s new friend will turn out to be far more than she seems, and Oskar’s wishes may not be the boons he had always assumed they would. But then again, maybe they’ll be exactly what he wanted.

It was a very quiet movie, light on dialogue in most of the scenes, and I almost think that the ubiquitous snow and cold were characters in their own rights. Symbolically, I mean, as emblems of that quiet, and of the inner coldness of so many of the characters. There was a lot of beauty in that austere trackless white and cold, and, despite everything, in Eli as well. I said to Nicole that the movie was beautiful and tragic, and it was tragic; but it strikes me that it could have been merely tawdry and pitiful without that abundance of austere beauty. I think this marks the first time that I could see why someone would actively buy into that whole vampire obsession that’s so solidly in vogue these days. I’m not sure if it was the cinematography, the acting, or the script, but Eli was downright magnetic in every frame of film, no matter how innocent or brutal the scene.

It’s hard to really explain why I’m still so drawn in by the memory of the movie without going spoiler all over the place. But my estimation of it has only gone upward in the subsequent days, and I’d run off to watch it again upon pretty much anyone’s request. I really am impressed.