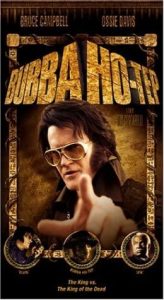 My point is, this ground is well-trodden. What you don’t see very often is any two of them in the same place. And all three? Unheard of! Except, obviously, not anymore. That’d be pretty weird, if I was just blathering on about things that don’t go together, randomly. But I (unlike previously) digress. The point of all this is that a movie pitting the elderly and retirement-homed King of Rock & Roll and most recently assassinated President (or so they would have us believe, to the point of dying him black to further the cover-up) against a redneck mummy out to steal their souls was made a few years ago, receiving a limited theatrical release and the beginnings of a cult following on DVD.

The story is simple. Simple enough that what I started to write would be a restatement of what I already just said, so I’ll skip that. What makes it good is the mood and the leisurely pacing. It’s easy to get lost in the sad lives of these men, sad because they believe they’re really Elvis and Kennedy, sad because they believe they’re saving their fellow inmates from a soul-sucking mummy, and sadder by far if they really are who they say they are. I’m making it sound depressing, and it is, but it’s also not. It’s hilarious, at times a little scary, and the melancholy mood lends it enough gravitas that it doesn’t turn out to be the cheesy B-movie it so desperately wants you to believe it is. Instead, it’s a story about heroes who still have legitimate heroism left in them fighting against a villain who isn’t just robbing them of their souls, but of what little dignity they have left.

For a movie that is about, well, you know, it has a great deal of heart to it. On top of which, it’s very, very funny. I can’t really think of a reason for anyone not to watch it.