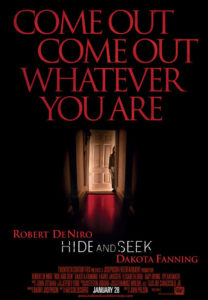 The thing is, this was a good movie. Several inevitable games of Hide and Seek, of course, but even those managed (for the most part) to be tense and creepy, rather than like the lame repetitive device they could have been.

Anyway, plot: Robert De Niro’s wife thinks their marriage is irreconcilable, and then suicides herself in the bathtub. Daughter Dakota Fanning (who is a beautiful little girl; just ask anyone in the script) goes a little bit insane. After a poorly defined period of time, De Niro takes his daughter to a gigantic house in upstate New York, so that she’s not surrounded by memories. Instead, she’s surrounded by an empty house, a creepy-looking cave in the woods, and De Niro’s hands off parenting approach, learned, apparently, through years of careful psychologist-being.

Naturally, she has no choice but to invent an imaginary friend. Except, the friend starts creating lots of scary mayhem, leading the audience to wonder: is the little girl doing all the stuff she blames on Charlie? Or is it the creepy neighbor? The meddling real-estate agent? A giant lovable-but-without-social-graces bear who lives in the cave? A hillbilly with only three teeth, who lives in the cave? Whoever it is, good camera work and acceptable child-acting keep the tension and the mysteriousness high, so I’ll say no more lest I give it away. (It’s not the bear, though.)

I think it’s because it worked so well that the flaws grate on me. Elisabeth Shue wanders in and out of the movie as the aunt of young Dakota’s would-be local townie friend, who seems to maybe want to date De Niro. And he seems maybe to want to date her too. It’s played too low key to understand, and it doesn’t help that it feel like his wife has been dead just a handful of months.

The final act drags on for an eternity beyond the (very-well played) climax, removing a lot of the goodwill I had toward the film. And then, even worse, the final two scenes both contained pointless groaners that could easily have been avoided. My recommendation: See it. Good mood piece, decent creep factor and the thing where they make you want to know what’s actually going on. But after the climax (you’ll know it when it happens), move on to something else. Whatever ending you make up in your own mind will be superior.

1 thought on “Hide and Seek”