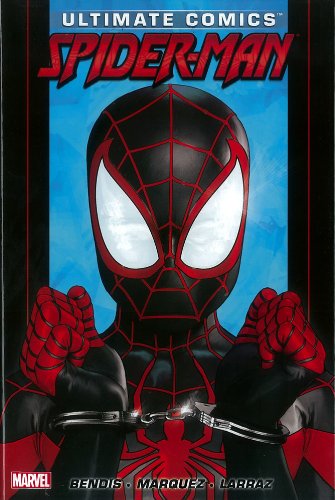 I’m about to read a large crossover event in the current greatly-reduced-in-size Ultimate Universe, and it turns out that 3/4 of the current Spider-Man book (cleverly titled “Volume 3“) is also in the crossover book. Why they released a crossover book for the X-Men and Ultimates but then still let Spider-Man be published separately was a mystery to me, and now that I’ve read the opening section that isn’t in said crossover book, the solution to that mystery seems to be “publishing mistake”.

Because, seriously, the two issues I am reviewing are solely about wrapping up the Prowler and Scorpion plotlines from Volume 2. Not only did they belong there thematically, but they also made for one hell of a cliffhanger! It’s hard to review this any better, because it’s so short that I can only get into spoiler territory, so let me just say this: you know how I was intrigued by the “dark uncle” mirror that Miles is facing? I cannot really imagine a more impactful moral resolution to that mirror than the one I was presented with, and I am once again really looking forward to what comes next.

Oh, also, the thing where every time I read one of these books, I’m caught up in missing Peter Parker too much to appreciate Miles’ story for what it is? I guess that has ended! Either it was the year off or Spider-Men bringing the two characters face to face or me reading three different Peter Parker books in 1978 continuity, but whatever it is, I’m settled. So that’s nice!