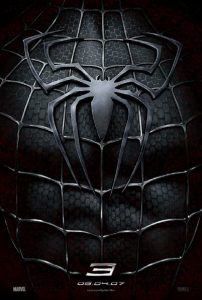 Well, it’s summer now. There is an extent to which I feel like summer comes too soon, since there are no longer any good movies left by August. Nevertheless, I can only observe the status of these things, not correct them. I am like a groundhog for movies! (Except my job’s easier; summer never doesn’t come.) My point, of course, is this: midnight showing of Spider-Man 3, from which I am still reeling. I mean, I’m not talking about the movie yet; it’s just, I got five hours of sleep the night before due to seeing a musical on stage, and then I got something like four hours last night, but (and here’s the secret to making it extra awesome!) split into two parts. So if I’m incoherent, a) pretend like this is unusual and then b) blame it on my non-functioning brain.[2]

Let’s get the easy part out of the way. It was good. I regret the lack of sleep only on an intellectual level, and I’m quite sure I’ll go see it again. I might not do so without the IMAX draw, but only because of how little time I have relative to the number of movies I want to see right now. So, yeah, good. Probably won’t be the best movie of the summer, though. People[1] will tell you it was bloated both in time and number of plots. I don’t agree with that, because each and every one of the plots was personal to Peter Parker. Maybe they didn’t need to all occur at once, but neither were they arbitrary, and it all hung together as far as I could tell. Also, the action lived up to the previous movies.

Plus, plenty of meaty themes to sink your teeth into. For example: Good or evil isn’t who you are, it’s what you do. I can find shades of that in every single major male character. The part where the females are pretty much uni-dimensional cardboard is probably a trope of the genre, but it’s unfortunate nevertheless. They stand out only because of the comparison, though. Also present, and painful to watch, is the pride goeth before a fall theme. Because you can pretty well see each part of it coming, and Peter so obviously can’t, and you just want to grab him and shake him and explain how easy it would be to dodge most of this. Except he’s still a kid, and kids are supposed to make mistakes, and I’m not even sure grown-up Spider-Man would be of any interest. Anyway, I think it’s fair to say that it’s also as deep as the previous movies.

So why won’t it be the best movie this summer? Because it has a couple of stumbles and one major failure. For one thing, there’s an extraneous character; for the amount that Gwen Stacey added to the plot, she either should have had more to do or had her purposes rolled into Betty Brant and the character saved for use in a future sequel. For another, there’s a scene with a butler late in the movie (don’t worry; he didn’t do it) that was a clumsy plot bridge and terribly acted by said butler. The former is the more egregious crime, of course, but the latter made the former stand out in stark relief. But the big failure was the lack of an iconic moment. You have the New Yorkers on the bridge in the first movie, and Spidey on the train in the second one; you can’t make the conclusion of the trilogy be great without exceeding or at least matching one of these. And it just… didn’t. As much as I liked the movie, I’m not going to end up loving it, and that’s the only good reason why not.

[1] and by people, I mean critics; apparently I am one of those, now? Or maybe it requires a paycheck. I have yet to receive a penny, much less break even on domain registration, though, so I don’t count as that. And if I was paying for the hosting, it would be even worse.
[2] Also, I can kill you with my brain.[3]
[3] For reasons of my own!