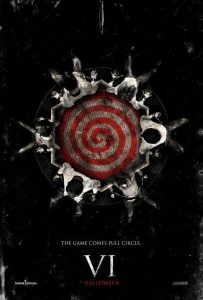 There are, aside from the first spare and intelligent entry in the series, only two reasons to watch a Saw movie. Either, you want to see what new Rube Goreberg[1] devices and tests that Jigsaw and his apprentices have devised for their latest victims, or you want to learn a little bit more about the story behind said murderous fiends. Because, the series is really excellent about doling out new information about an increasingly intricate backstory without retconning anything that has gone before, despite the overall tale spending far more time in the past than the future. And it’s really excellent at killing people in new and implausible ways.

So, pleasingly, Saw VI hit both of these marks, and to some extent, that’s all you need to know. But it also went zany. I don’t think I minded much, but it was really strange watching the franchise get all political. Because this time, the targets were not random people who needed to learn lessons about living, but health insurance executives (and associated hangers on) who needed to learn those lessons. The message was ham-fisted, albeit timely. But I think that was kind of the point, the ham-fistedness. To just really stick it to those jerks, if you will, in full-on audience service.[2] Plus, the ongoing plotline stuff was wrapped up a little bit more thoroughly than usual. So, strange movie all around. That said, I’m pretty sure there will be a Saw VII next October. ‘Cause, y’know.