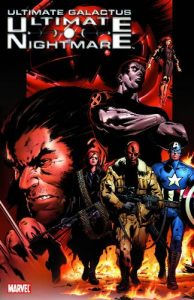 With my first foray into an Ultimate universe crossover series, I find myself wishing for the first time that I was reading these approximately as they come out instead of all jumbled together and out of order. One of the first thing I noticed about the Ultimate Galactus trilogy (or at least about its first volume) is that several of the characters have evolved well past who they were when these books were written. Specifically, both Wolverine and Nick Fury’s reactions to the X-Men seemed entirely uncharacteristic with my current expectations. But, on the bright side, I continue to make good progress and will eventually catch up.

The aptly named Ultimate Nightmare chronicles an unexpected worldwide multi-spectrum signal being broadcast from Tunguska, site of a century-old meteor strike that has been science fiction fodder ever since. Among the reactants to the images of an alien culture being destroyed while a mysterious voice repeats certain doom over and over are select members of the X-Men and of the Ultimates[1]. For the most part, the meat of the story purportedly being told lies in the future. This book was largely an excuse to visualize several bit character villains from Marvel’s past, in the guise of decades of Soviet experimentation. Luckily, as in the case of footnote 1, the book was more than entertaining enough to support being a mere prelude to the Galactus story I have been implicitly promised.

[1] Including a character named Sam Wilson with whom I am wholly unfamiliar; pleasingly, he was interesting to read about.