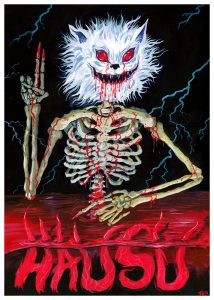 Man. This was a ride.

You know all the stereotypes about Japanese schoolgirls you learned from anime? It turns out they also existed in 1977 in Japanese cinema. This particular set of schoolgirls, and let me see if I can get this right, consist of Fantasy (who has a vivid imagination), Mac (who likes to eat), Melody (who plays music you see), Sweet (who helps out, like with cleaning or whatever), Kung Fu (who… I mean, you can suss this one out), Professor[1] (she’s smart and wears glasses), and Gorgeous, who in addition to, one supposes, being pretty, also precipitates the main action of the film by being upset that her father has decided to remarry eight years after his wife’s death, so she refuses to take all her friends on summer vacation with him and his fiancee and instead takes them to visit her (maternal, natch) aunt’s House.

Between the melodrama of Japanese schoolgirls and the separate melodrama of the tragic tale of Gorgeous’s spinster aunt, dating back to the war[2], I really had no idea what to expect at this point, and while it perhaps would be better for the viewer to show up similarly uninformed, I gots to earn my money[3] somehow, so, stop here if you want to see the movie based on only the above description and my nod that yes, probably watch it.