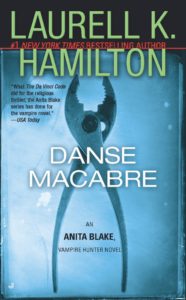 So, here’s a possibly interesting tidbit about Danse Macabre. When I first knew of its existence in hardback, I wasn’t yet halfway through the series, and it looked like a lot of change was in store ahead. Anita was going from a zombie animator and vampire killer and unofficial detective to federal marshal? Cool beans! Pregnancy scare? Sure, fair enough, she’s got a boyfriend and maybe a second one. This would have been 2006, I guess?

Also, that probably wasn’t interesting at all, but it was pretty much the only thing I could think of to type that wouldn’t be dripping with vitriol, and it seems fair to give my readers a safe haven wherein they can decide to not keep going.

Because, Jesus God, this is a fucking terrible book. It spans 48 hours leading up to a vampire ballet performance, which latter part might have been pretty cool to watch, I guess? It was ten of the maybe fifteen pages where I didn’t want to claw my eyes out of my head while reading it, anyway, so I can’t help but look upon the scene fondly, y’know? In the meantime, there are these five hundred pages spanning these 48 hours, in which nothing of any interest happens. Anita might be pregnant, and she’s going to be sure to be strong about it except for fighting with all of her friends, or maybe that should be the definition of strength instead of an exception. But she also just might carry a bunch of impossible virii and be way stronger than anyone yet suspects, instead of being pregnant. All those Master Vampires they’ve invited to town for the ballet might have been a bad scary idea that will destroy their lives, or maybe they’ll gain all kinds of new power by having giant vampire orgies instead. She’ll certainly have to manage the expectations and feelings of her myriad emotionally crippled boyfriends, sure the normal ones like Richard and Nathaniel and Jason, but let’s not forget all the awesome non-names we can throw around, like Haven or Wicked or Truth or London or Asher or for fuck’s sake Requiem! And as if that weren’t bad enough, the Master of Chicago is named Augustine, which would be like a breath of fresh air except that he’s older than perennial fan favorite Jean Claude, and yet everyone calls him Auggie. AUGGIE!!!!

It’s like… well, I know I’ve mentioned Mary Sue before, but to sum up right quick, Mary Sue is a character in Star Trek fan fiction from probably the ’70s, who was written as a stand-in for the author, and she shows up every main character you’ve heard of on the Enterprise, she’s the one person with all the special skills and talents to save the day, plus pretty much everyone wants her in the worst way. It’s not that Anita Blake is a Mary Sue kind of character. It’s not THAT SIMPLE. It’s like, in these last few books, Anita Blake is the character that the original fictional Mary Sue would have written, if she herself were an author in addition to her many space-faring talents.

The worst part? I actually finished the book. I don’t exactly know how. I mean, at the beginning, I wasn’t angry, I just wanted to quit because it was so unpleasant. But it felt at that point like I was having an unfair personal reaction to some story elements, so I persevered. Eventually the relief of that part of the plot fading out of prominence got me through the interminable middle section in a bull-rush. And by the time I realized that every time I read more than a page at a sitting, I got angry, I was a) almost finished and b) didn’t have access to the next book I wanted to read. And by the time I solved that problem, I was really almost finished, and the old idiotic completionism had kicked in. But, seriously, I think I accidentally got a little drunk on Wednesday night because I was reading, and if I couldn’t focus on the book, I wouldn’t have to read anymore. I don’t so much no longer care about these characters as I sincerely want them all to die in a fire. And I’m in the unique position of being able to make that happen. But it seems like I shouldn’t?

Anyway. Here’s what does happen: Anita gets threatened in dreams by the First Evil, or the Queen of the Damned, or someone like that. The Mother of Night, there we go. Anyway, she’s the very first vampire, and she’s been waking up gradually for a few books now. And then later, Anita talks to a guy who was made a vampire by that one chick, and who might be the Arthurian Merlin instead of just a vampire with a similar name, and who is certainly the first dude in a long time that might be more powerful than our merry band of sex-starved heroes. Which might matter, except he wants to sign on with them instead of oppose them? I guess I just ruined the book, but if I can tell you every single plot event that occurred in only two-ish sentences, it may just be that someone else ruined the book first.

God! I can’t stop being pissed off about this!

And all the fucking horrible verbal tics! “That wonderful Gallic shrug that meant everything or nothing.” “[This or that sexual pecadillo] just flat did it for me.” The repetition between thought and action, along the lines of, say, someone asks a question, then our author types, “I didn’t know the answer to that. ‘I don’t know the answer to that,’ I said.” I mean, the first few and others that I thankfully can’t recall offhand, there’s no reason for you to read them and understand how, after a dozen books of the same phrases over and over again, I am boiling with fury at the memory. But that last repetition thing? Who is possibly allowed to write like that?!