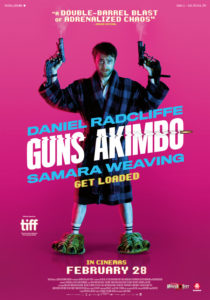 I have heard of Guns Akimbo before, so the Amazon Prime rule does not apply.

So, remember BumFights, where people would pay bums to, y’know, fight each other, and record it on their phones, and then upload those videos and charge people to watch them, and voilà, instant albeit troubling profit[1]? Imagine that world advanced by technology and the decline and fall of civilized society, and you have Skizm, a website where people pay to watch random folk hunt and murder each other.

Now imagine that Harry Potter hadn’t been a wizard, so he ended up as a mobile game software developer with a way too cool girlfriend who came to her senses and dumped him, and now he’s got nothing going for him, so he trolls the Skizm website insulting its viewership one at a time. Until he insults the wrong person, and ends up home-invaded, knocked out, and wakes up with a pair of guns literally bolted to his hands, because he has become the latest contestant, with 24 hours to kill or be killed by his opponent.

Sure, the plot is a little deeper than that, but you know everything you need to know. Either that’s hilarious and you want to watch it, or you’re a better person than I am.

[1] I did a modicum of research and determined that it was too long ago for phone recordings, was released on DVD, and also maybe what I’m remembering was more backlash hype that reality. But that’s not important to the metaphor.