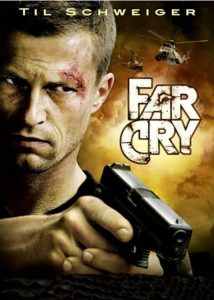 You know the rule about movies that you can’t make a good adaptation of a video game? It’s not 100% true, but it sure mostly is. I’m pretty sure I played the video game Far Cry since the inception of this blog, a fact which will be confirmed or denied by the link or lack of link just above, at the reference point.

Anyway, I have come here mostly to say that Far Cry (the film) lives down to those expectations. Its sins include: giving away way too much of the plot way too soon – the game was so great about the slow reveal; cartoonishly evil characters – like, at some point, when you’re a mercenary army and someone outside your hierarchy is disciplining your members by shooting them in the head, and you’re all armed and outnumber that person by 20 to 1, you just take the person out and blame it on the insurgent guy who everyone already knows is running around the island; extraneous and unfunny sidekicks; unnecessary to the plot sex scenes; even worse, unnecessary to the plot sex scenes where you skip the actual sex part of the scene.

There are probably more sins than these, but I was working and not being very distracted by the movie from working (which is both good and disappointing at the same time), so I reckon I had plenty of time to miss some. I didn’t even know they made this movie, to be honest, and finding it on Amazon Prime Video definitely feeds my theory about the contents of that service!