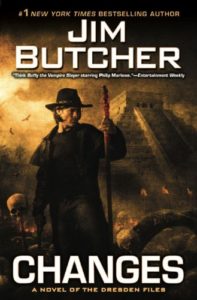 If you were looking for the book with the most understated title, I would definitely offer into contention Changes, the Dresden Files book that puts me only two behind (I think). I received a spoiler for this book in the first sentence of someone’s review of its sequel, before I had quite realized what was happening. And so (after the annoyance faded), I stroked my chin and nodded wisely and said, “Ah, Changes. Indeed.” The spoiler I received, you see, was… no, wait, come back. Of course I’m not going to actually spoil it myself! Who am I here? I am only identifying its placement in the text, for the benefit of folks who have already read it. You know the last thing that happens? That one.

The point, my friends who have not read these books, is that everyone else is now snickering at me for thinking I understood what was going on in advance, and also for being quite so put out as I had been. In retrospect, considering a book whose first major change occurs in the opening paragraph[1] and who does not let up on Harry Dresden either being confronted with or choosing for himself one major change in the way his life works (worked, I should say, because boy howdy are things fundamentally different now) after another, I can even almost understand how said reviewer of the sequel could have tossed out that one spoiler so casually. As huge as it seemed to me at the time, it feels pretty small potatoes now. I, uh, think I’ll probably read the last few of these soon now. Not to avoid spoilers, that’s a fringe benefit, but because I really need to know where this is going.

[1] And that change is arguably bigger than the one I was spoiled for!