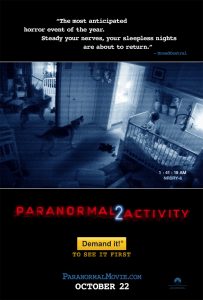 When I saw the imaginatively-named sequel to last year’s Paranormal Activity, I achieved at least a little of what I then claimed would have made it better to watch: to whit, there was far less of an audience distracting me with their overblown terror, making it much easier to focus on the tension growing into dread that both movies most likely contained, though for obvious and difficult-to-validate reasons, I think this latter had a lot more of. The plot is similar to that of the previous movie, which is to say there are people in a house, cameras running all the time (this time from a security system), and gradually more terrifying events occur over a period of weeks, all caught on these cameras and presented to the audience only through those lenses. There are a few more answers than last time, which works out well when you consider that it’s more or less a prequel to the first movie and even includes some of the same characters.

But I have to hope you didn’t come for answers, because the point of an old-fashioned haunting story like this is to get nervous, occasionally jump, and spend a little time thinking about the not-always-comprehensible world around you, where answers can be hard to get to on the best of days, and let’s be frank, these cameras are not recording the best of days.[1]

[1] Someday, when HTML 5 (or 6) can see where peoples’ eyes are on a screen, I’ll code one of those jump-out jpegs to pop onto the screen just as you finish the review. That’ll be pretty awesome, yo.