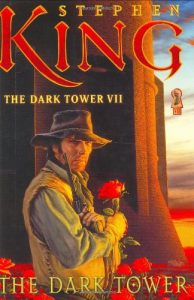 I’m having a tough time with this one. Obviously in part because it’s the last book of a series. Also because it’s (apparently) Stephen King’s last book in general, and I have a lot of respect for the guy.

Not for the prose. Particularly in The Dark Tower (which is the seventh volume in the series of the same name), and particularly early on in it, some of his verbal tics were starting to be really grating. On the one hand, I have a sense that some part of that is to draw you into the world of Roland of Gilead, but on the other, I have the very strong sense that this kind of thing shouldn’t be necessary to draw the reader in. And for that matter, I doubt it would have been, for me. I’m not sure if the flaw is in King for not trusting his material enough to stand on its own merit or if my theory is wrong and the tics are just there because he enjoys them. At any rate, it was never bad enough to make me want to stop reading, and it eventually either lessened or faded into the background for me.

Not for the plotting, either, although this book was reasonably well plotted. Certainly some of his books are not, but that hasn’t stopped me reading them, and probably won’t stop me re-reading them. Even when plotted well, he relies on scripted fate to get his characters out of certain situations. This bothers me, sometimes, because deus ex machina is usually pretty lame, even when it’s explicitly laid out. But then, it would have been fairly easy to not put the characters in a situation that required it, and also it helps / hinders the protagonists and antagonists alike. So, I think it might be partial commentary on the idea. Either way, this only has a minor negative (or positive, depending on my frame of mind) impact on my enjoyment.

No, what keeps me coming back is how good a job he does of presenting the story. He has a distinctive voice, which only helps, but I find it so easy to consider it a story I’m being told, across a fire, say, or in an open amphitheater. It’s comfortable.

That said, I’ve barely touched on the book itself. And probably I won’t much more, because if you haven’t read the previous books, it’s hard for me to do more than recommend the series, and if you have, I’m pretty sure I won’t be convincing you (or not) to read the last one. What can I say, though?

There were times when I read it voraciously, and had to slow myself down and enjoy it. There were times when I read it slowly, because I didn’t want to come to what was about to happen. I had horror in my heart, joy lighting my face, and more than once visceral fear (because it always comes back to a spider eventually, doesn’t it?). All because of how well he tells a story, sure, but I’m talking about my reactions to this story, not just to his skill at it.

The Dark Tower series as a whole weaves a good yarn. Some would say self-indulgent, but I thought if anything that the self-indulgent parts are more likely to be self-flagellant, from the author’s perspective. In any case, yeah, the author continues to appear in his own work in this book as he has in a couple of previous ones, and it still works. I know I wouldn’t believe that if someone were telling me, but it does. The costs and the redemptions are balanced. That is to say, King rarely tells a story where everything works out for the good guys, but this book is not one of his bloodbaths just for the sake of the blood, either.

Yeah, I want to say more, but that’s really all I can say. It’s a good story. That’s enough to convince me, because it really is quite good. Also, it (the series) has what I maintain should be placed among the very best opening lines in literary history: The man in black fled across the desert, and the gunslinger followed.

2 thoughts on “The Dark Tower”