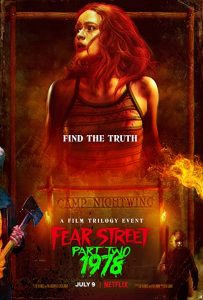 As a sequel to Fear Street 1994, the middle entry of the trilogy is perfectly serviceable. There’s a good five to ten minutes of material in a nearly two hour movie that advances the overall plot of the Fear Street series, and, okay, that doesn’t actually sound very good, does it?

But if you view the connective trilogy tissue as 5-10 minutes of digression from a 1970s summer camp horror flick, well then, that’s not very much digression at all, now is it? And I appreciate the movies from that perspective. As much as 1994 was a slick Scream homage[1], 1978 is… well, okay, also pretty slick, at least visually, but let that go. It’s an homage to the murder as a morality play days of the late ’70s and early ’80s when most of the people who got killed were horny teens who “deserved” it. And you could tell they just wanted a good excuse to go to that particular retro well.

If they’d wanted to movie about murders in the 1950s, or 1930s, or even earlier, instead? That is not well-traveled ground, and the premise super allows for it. But what they picked was the genre’s bread-and-butter, and while on the one hand: lazy!, on the other hand, I liked it better as a movie versus the first one, even though it did so little with the advancing that overall plot thing as I’ve mentioned.

[1] Minus the whodunnit aspect. We already have known all along that the creepy 17th Century witch done it.