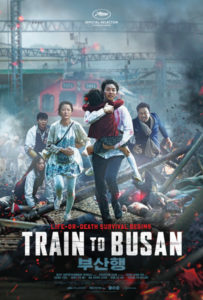 It’s no secret that I love a good zombie movie, which I define as one in which the zombies act as a setting upon which the truth of the characters is revealed. I freely acknowledge that this setting is, in the vernacular, “played out”. I should clarify, as I think that usage mostly means, ugh, zombie makeup and biting people, whereas what I mean is that there may not be anything new to say about the truths of characters in that apocalyptic situation.

That said, I still do love a good zombie movie, even if it’s one I’ve seen before (metaphorically or literally, although this time definitely the metaphorical version is at issue). Train to Busan tells the story of a hedge fund manager and his nearly-estranged young daughter, off to visit her mother (his ex-wife) on the occasion of her (7th? 8th? 6th? …let’s say 7th) birthday. The high speed bullet train is full of characters: elderly sisters, a C-level business executive, a high school baseball team and its cheerleader, a pregnant couple, some homeless guy who’s already seen too much on a day that most of the passengers don’t even know is unusual, oh, and a lady with a bite on her leg who just barely made it on before the doors closed.

Over the course of their trip to Busan[1], these people (especially the hedge fund manager, you understand) will learn a lot about each other, themselves, and what’s really important. Also, most of them (especially the ones I didn’t paint a picture of above) will die. Because that’s what happens in a good zombie movie. Both parts, I mean. My point is, this one was indeed a good one, and “seen it before” or not, I approve.

[1] Do I want to play a heavily-skinned remake of Tokaido based on this movie? Maybe!